Several weeks have passed since I by email applied to the Presidency of Lithuania requesting an explanation why our state’s policy is so tendentious. I mean Lithuania’s obvious indulgencies to Armenia, who is pro-Russian, tolerates terrorism and until autumn 2020 had occupied Nagorno Karabakh territories, which belong to Azerbaijan (after several decades long unsuccessful negotiations Azerbaijan did not have any other option than in October-November 2020 reclaim those lands by force, during so called 44 days war). There wasn’t any answer from Presidency’s advisors. Deadly silence.

By the way, I have sent similar questions to the Ministry of Foreign Affairs of Lithuania (MFA). It responded after several days. In it’s answers, the Ministry claimed that Lithuania is not hostile to any of the republics of South Caucasus, that Lithuania maintains friendly relations with all countries in this region. According to Lithuanian MFA, there aren’t any double standards.

Of course, Lithuanian MFA did not convince me that Lithuania acts honestly in South Caucasus. Here are several arguments, which, in my opinion, are the most noticeable. The wife of Armenian Prime Minister Nikol Pashinian has already visited Lithuania (she was hosted by Lithuania’s First Lady Diana Nausediene, wife of Lithuanian President Gitanas Nauseda). Mr. Pashinian himself has visited Lithuania too. Wives of Azeri leaders have not been invited to Vilnius. Highest officials of Azerbaijan are also not invited to Vilnius. If Lithuania sends humanitarian aid, vaccination, medical teams to South Caucasus – they are only sent to Armenia. When in the past, 1915 Armenian tragedy was commemorated at the Lithuanian Genocide and Resistance Centre (LGRC), the event was attended by the highest officials of LGRC. But when victims of Hocali were commemorated at LGRC premises, there wasn’t even one of the highest officials of LGRC.  Most of Lithuanian politicians, political scientists, journalists criticized Azerbaijan for choosing a military way to take back Karabakh. But everyone kept subtly hushing up that, according to the international law, Karabakh belongs to Azerbaijan, that official Baku already had been patiently waiting a long time for Western help, but did not get it. Armenia was not criticized for having occupied about 20 percent of Azerbaijan’s lands for almost three decades. It is very complicated in Lithuanian press to publish an article, favourable to Azerbaijan, especially about Karabakh conflict. They do not print it. There have been many television programmes, when discussion participants disputed Azeri right to Karabakh.  There isn’t a single line that many Azerbaijani people in the past lived in Karabakh, even Yerevan, who were driven off their homelands. Nothing about suffering of Azeri refugees. Not a single word that Armenia in autumn 2020 insidiously shelled Ganja, Tartar, Barda cities, which have no connection to Karabakh and that civilian Azeri were killed in these attacks. Not a line that during Armenian rule in Karabakh, many cultural, historical and religious Azeri monuments have been destroyed or desecrated. Only worrying that allegedly now Muslim Azeri, entering Karabakh, will destroy Christian cultural and historic monuments.

The number of examples how Lithuania’s government tendentiously ignores Azerbaijan (the only former Soviet republic, which managed to reclaim her territories, Moldova, Georgia and Ukraine do not have such victories yet) is increasing. On November 3 Azerbaijan’s Embassy to Vilnius at Vilnius Rotuse marked the Victory Day (operation of Karabakh liberation in 2020 lasted from September 27 to November 8). I was there, I saw how many, ironically speaking, high ranking Lithuanian officials came to Rotuse. That evening I missed the guests from Lithuanian Presidency, Seimas, MFA. So I will once again ask President Gitanas Nauseda, what could that mean? Lithuania is not happy that Azerbaijan finally managed to restore its territorial integrity?

Another example: on 4-6 November the 8th Global Baku Forum was organized at the Azeri capital, with the special name ‘The world after Covid-19’. This internationally recognized event was attended by over 300 guests from across the world – North America, Europe, Asia. Did at least one Lithuanian politician go to this Forum? Did they send an official congratulations?

By the way, former Latvian presidents Valdis Zatlers and Vaira Vike Freiberga went (or remotely congratulated) this Azeri international forum. Even current Latvian President Egils Levits was not indifferent to the Azeri initiative. On 1 November Estonian Parliament’s head of group for inter-parliamentary relations with Azerbaijan Sven Sester visited Azerbaijan. And what is the attention of Lithuanian presidents to Azerbaijan, who has restored its territorial integrity? For example, Valdas Adamkus’, Dalia Grybauskaite’s? Maybe I have missed it, have not noticed it?

Why am I presenting these arguments? I would want Lithuania to always and everywhere be just – not only when we speak about sins of Russia, Belarus or China. Only then one can receive international recognition and respect. Only then Lithuania will have a moral right to ask others to be honest to her.

But now it is incomprehensible: through Eastern Partnership programmes Lithuania is pulling Armenia to the West. Lithuania pretends she does not notice a Russian military base, deployed in Armenia, that this year, in the aggressive military drill ‘Zapad’ held by Russia and Belarus by the Lithuanian border, Armenian military instructors too were learning how to occupy Baltic countries.

Finally, Lithuania pretends she does not know what rather recently Armenian President Armen Sarkisian told Russian television ‘Rossija-24’. Among other things, he said that Vladimir Putin’s ruled Russia is a big, sincere partner of Armenia. Without Russia Armenia is not capable of making a single step. If not for Russia, maybe there Armenia would not even be…

So what will President Gitanas Nauseda do today? Will he not send a small greeting to Baku? 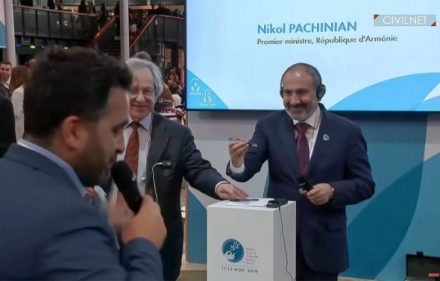 Gintaras Visockas. What does Armenian Prime Minister need in Vilnius?