Few other human beings were eye witnesses to, and participants in, events of the 20th Century as was Vilius Brazenas. A survivor of wars, revolution, plague, famine, foreign military occupations and forced deportations, he became a tireless champion of freedom and unyielding foe of totalitarianism in all its forms.

Mr. Brazenas passed away at the age of 97, in a hospital in Vilnius, Lithuania, on October 3rd following complications from a recent fall.

Although best known in his native Lithuania, where his books, essays, and newspaper columns were widely read, and where he was a frequent speaker at major political and education events, Mr. Brazenas also had many admirers throughout the world who came to know him through his speaking engagements sponsored by The John Birch Society and his writing and interviews in The New American magazine.

Vilius Brazenas was one of the last remaining living beings actually to have seen Vladimir Lenin and other Bolshevik leaders in the flesh. In 1922, as a 9-year-old, Vilius and his fellow schoolmates were forced to march in the May Day celebration in Moscow’s Red Square, passing before the dais where Lenin and the other Communist Party leaders were seated. Brazenas was born in 1913, to Lithuanian parents who were then living in Riga, Latvia, where his father had found work in a rubber factory. The Baltic States — Lithuania, Latvia, and Estonia — were then under the control of czarist Russia. In 1915, with World War I raging, Russia moved many factories from the Baltics to Russia, and the Brazenas family, along with many others, went with the factories. When the Bolsheviks came to power in 1917, they were trapped in the civil war and turmoil that ensued. Brazenas contracted cholera in an epidemic that swept Russia and Ukraine.  Vilius recovered from the disease but it took the lives of his father and two brothers. In 1922 he returned to Lithuania with his mother and sister. In June 1940 the Soviet Red Army invaded and occupied Lithuania, as Stalin and Hitler divided Europe according to the Molotov-Ribbentrop Pact. The following year Hitler turned on Stalin, leading to the Nazi occupation of Lithuania. With the retreat of German forces, the Soviets reestablished Communist control in 1944.

Fleeing the Communist occupation of his own country, Brazenas fled to the British-occupied zone of Germany in 1944, with his wife and young daughter, and then emigrated to the United States in 1949. He served for many years as chairman of the Lithuanian Freedom Forum in Florida and was also a vice president of the Supreme Committee for the Liberation of Lithuania, which was formed underground during the Nazi occupation and later became the primary organization in exile fighting for a  Lithuania free from Soviet occupation. In 1960 he discovered The John Birch Society (founded in 1958) and immediately became a member. Over the next three decades he would become one of the Society’s most active representatives, addressing audiences at hundreds of events sponsored by the American Opinion Speakers Bureau, as well as hundreds of radio and television appearances.

A keen political observer and a prolific writer, Brazenas was the author of six books and numerous essays and newspaper columns. Among his books, all of which were published in Lithuanian, are: Conspiracy Against Humanity (1975); The New World Order (2000); Under Twelve Flags: Between Tyranny and Freedom (2005); and Reminiscences for My Fellow Fighters (2009). When Vilius and his wife Eda made their first return trip to Lithuania, in 1994, they were surprised and pleased to learn that so many people there knew about his writings and also knew about The John Birch Society.  They knew about the JBS because they had heard and read the Kremlin’s attacks on the Society. As Brazenas put it: they had gotten the word „from the horse’s mouth.“  They knew about his writings because some of his works, including his first political book, Conspiracy Against Humanity, had managed to find their way into Lithuania, despite the strict censorship and repression under the Soviet occupation.

In the year 2000, his beloved wife, Eda, passed away. Lithuanian journalist and friend of the Brazenases, Dr. Ona Voveriene, wrote of Eda that she was: „his wife, the mother of his child, his most faithful friend, his lifelong partner and his greatest supporter in all that he did.  He brought her remains home, to Lithuania, and, having buried her amongst the pines of a cemetery on one of the legendary hills of Vilnius, he committed himself to returning to Lithuania and continuing his life’s work — the battle against Communism.“

In June of that same year Vilius Brazenas was indeed very active in that battle, as a major participant in the International Congress for the Evaluation of the Crimes of Communism, which was held in Vilnius, the capital of Lithuania. Representatives of 25 nations from Europe, the Americas and Asia came to Vilnius to present documentation and eyewitness testimony on the horrendous record of Communism worldwide: murder, genocide, torture, religious persecution, imprisonment, forced labor, and indoctrination.

In 2003, in his 90th year, Vilius Brazenas returned to Vilnius to receive Lithuania’s highest civilian honor. On May 18th, in a formal ceremony at the Presidential Palace, he was awarded the Order of the Vytis (Knight’s) Cross. The presidential award was presented to him as an outstanding representative of the world Lithuanian community. Also acknowledged during the presentation was his role in resisting Nazi and Communist occupation of Lithuania, and „his lifelong work“ on behalf of Lithuanian independence. He was nominated for the award by the Associations of Lithuanian Former Freedom Fighters, Former Political Prisoners, and Former Political Exiles, as well as Lithuania’s Freedom League, the Genocide Museum and the Organizing Committee of the 2000 Anti-Commuist Congress and Tribunal.  He was also honored during the same time trip by Lithuania’s major philatelic organization, which issued a commemorative stamp bearing his image, together with an inscription detailing some of his exploits.

In 2004, Brazenas moved back to Vilnius to live out the remainder of his days in as useful a manner as he possibly could. „God has given me strength and a long life for a reason,“ he told me, „and I believe he still has much work for me to do.“ And Vilius had no trouble finding that work. He was under constant pressure to speak to elementary schools, high schools, colleges, universities, civic and military organizations, scouting groups, and political events — and he gladly accepted. He felt especially drawn to young people and had an ability to connect with them. „Young people and kids would mob him for his autograph whenever he spoke,“ Brazenas’s daughter, Lyvia Garsys, told me. I had witnessed this myself years earlier when Vilius and I had worked together as speakers at many of the John Birch Society’s summer youth camps.

In addition to his constant speaking engagements, he continued to write for a number of Lithuanian periodicals, including Lietuvos Aidas (Lithuania’s Echo) and Varpas, and frequently gave commentary and interviews for Lithuanian radio and television.

In June of 2007 I journeyed to Lithuania to attend with Vilius two historic conferences — in Vilnius and Kaunas — on the crimes of Communism, and specifically focused on the Soviet occupation of Lithuania and the deportations of the Baltic peoples.

During the Soviet occupation, more than 275,000 Lithuanians, including tens of thousands of women and children, were sent to concentration camps and/or deported to Russia, usually Siberia. Most did not survive the ordeal, but thousands did and returned to Lithuania — years, and in some cases, decades, later — to tell of their harrowing experiences.

A Hero Among Heroes
I was privileged to meet many of those survivors. Among the most memorable are:

All of those mentioned above revered Vilius Brazenas and were especially grateful that through all the years of their ordeals he had faithfully championed their cause and the cause of a free and independent Lithuania. He had not allowed them to be forgotten. Vilius humbly discounted his own efforts in comparison to the sufferings endured by countrymen who were trapped under the Soviet iron heel. But they did not see it that way.

„It meant so much to us to know that Brazenas and others like him were telling our story to the world,“ Forest Brother Kentra Albinas told me. „He is a true hero and his writings and activities in the West gave us great encouragement.“

On October 6, Vilius Brazenas was buried beside his wife Eda, following a Requiem Mass celebrated by his dear friend and compatriot, Monsignor Alfonsas Svarinskas, at the Church of Saints Peter & Paul in Vilnius. A military honor guard led the procession and gave a three-gun salute at his graveside memorial, which was attended by more than 100 friends and dignitaries.

Like so many others, I was honored and blessed to have known this remarkable man and to have called him friend. He will be dearly missed, for there are far too few like him. However, he has left a bit of himself behind in each of us whom he has inspired by the example of an honorable life heroically lived and unfailing devotion to God, family, and country.

Frontline Freedom Fighter (An interview with Vilius Brazenas by William F. Jasper in the August 14, 2000 issue of The New American)

The „New European Soviet“ (An article by Vilius Brazenas published in the September 6, 2004 issue of The New American). 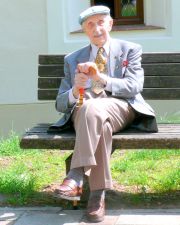 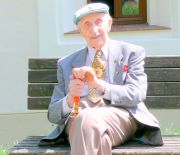 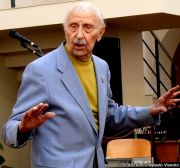