A Khachkar is not bad or objectionable symbol that could be criticized in any way. It reminds of Lithuanian cross. It is a sacred monument of Armenian people carved in a solid lump of basalt or tufa. Armenians erect the mon important occasions. So, what is wrong with Armenian khachkar, erected in Klaipėda in 2015, you might ask?

Nonetheless, the mistake Lithuania made allowing to erect Armenian khachkar is obvious.

Let us not be so trusting and naive

Lithuanians should not be trusting and naïve. Everything is always done for a reason. Some actions have a deep political implication. Even this seemingly beautiful token of Armenian – Lithuanian friendship is full of political nuances.

A khachkar is not your ordinary cross. It is often dedicated to commemorate painful events that happened to Armenians over a century ago, when the Ottoman Empire, later Turkey, fought against the Russian Empire. By allowing Armenians to erect a khachkar we involuntarily alienate Turkey. Before signing khachkar erection permits Lithuanians should sometimes remember a Turkish version of events: in 1915, a fierce war erupted between Turks and Russians. From the beginning Armenians supported enemies of Turkey. The bloodshed was unavoidable and both Armenians and Turks suffered massive casualties.

Let us be honest, by allowing to erect a khachkar, the authorities of Klaipėda city pleased Armenia – a country, which does not belong to NATO and which has a Russian military base allowed in its territory. By approving this idea of Armenians of Lithuania we were caught in a serious political conflict which could have been avoided (no one can blame us for oppressing Armenians during the Turkey and Russia war in 1915).

The khachkar of Klaipėda is not the only one. One has already been erected on the Hill of Crosses and another one in Kaunas. There are plans to erect khachkars in other Lithuanian cities as well. My question is: is the appetite of Armenians of Lithuania not too big? Only 1500 Armenians live in Lithuania, yet there are 3 khachkars on our soil already! What if Armenians are trying to place their crosses in all large Lithuanian cities and in doing so mess the relationship with our NATO partneronce and for all?

What if Armenia, in return for khachkars erected in Lithuania, would build in Yerevan a grand monument for Lithuanian partisans, deportees and political prisoners who suffered from Soviet occupation? All according to the principle of pragmatism: “We did it for you, you will do it for us.” That is how I would imagine a successful cooperation between two countries. More over, we have already honored the official Yerevan in 2005, when Lithuania recognized deaths of Armenians of 1915 as genocide.

Russian military base will be in Armenia till 2044

Let us not be naïve. Yerevan will not build a monument for Lithuanian partisans. At least till Russian military base will be located at Gyumri city, and the base will be there for a while. An agreement for Russian military base in Armenia was signed for 25 years. Later, the agreement was extended for another 49 years (till 2044) when Russian President Dmitry Medvedev was officially visiting Armenia in 2010.

Yet I deliberately proposed the idea of Lithuanian monument in Yerevan. Think of khachkars. Do they look strange in Lithuania?

I have recently had one more doubtabout good intentions by erecting khachkars when I read an article in rus.delfi.ee called “We have a lot in common”. It was an interview with Armenian Ambassador to Baltic States Tigran Mkrtchyan. During his official visit in Estonia, the Armenian diplomat gave an extensive overview of Armenian plans in Baltic States. While reading this interview a suspicion comes to mind that erection of khachkars in Lithuania is not random. Having in mind ambassador’s ambitions, Armenia aims to put strong foundations in Baltic States.

There is nothing wrong with that. However, there are many debatable statements in Tigran Mkrtchyan’s story. One of them – “We have a lot in common”. Sure, there are some similarities. We are all people after all. However, Baltic States have one principal difference. Lithuania, Latvia or Estonia cannot be accused of occupation of foreign lands in the last decades. The same cannot be said about Armenia who, with the help of Russia, still holds territories of its neighbor occupied.

Tigran Mkrtchyan fantasized, that it is possible to maintain friendly relationship both with Russia and with the European Union and the United States. Yet how to sit on two or three different chairs at the same time he did not explain.

To the question what he thinks about assassination of Russian ambassador in Turkey, Tigran Mkrtchyan remembered Hrant Dink, Armenian journalist, who was killed because of his nationality in Stambul, in 2007. However, the Armenian ambassador did not say a word about tens of Turkish diplomats and consuls who were assassinated in various European cities by Armenian terrorist organization, including the cruel ASALA.

Tigran Mkrtchyan proudly mentioned tens of thousands Syrian refugees of Armenian origin who found shelter in small-sized Armenia. However, he did not mention that Syrian refugees are being settled not only in Armenia but also in Nagorno-Karabakh – a territory that was taken from Azerbaijan by Russian military forces.

The Battle of Grunwald and Armenian troop

Interestingly enough, the Armenian ambassador claimed that in the Battle of Grunwald against Teutonic Order Lithuanians were supported by… Armenian troop. Indeed, we no longer believe in such tales. It is not the first time when someone claims victory of Grunwald for themselves: Russians, Polish or Belarusians.

If we put together all these claims, we would have to admit that the Battle of Grunwald was won by anyone but Lithuanians.

These persistent attempts to diminish Lithuanian contribution are dangerous. Lithuania’s role in the Battle of Grunwald was only supporting, random, symbolic – this is the opinion that is being shaped in international political, historical and social backgrounds.

But how Lithuanians can defend themselves from such tendentious approaches.

Today once again we were shocked by news. It appears that Armenians and Lithuanians fought shoulder to shoulder in the Battle of Grunwald. Moreover, it was a whole Armenian troop.

Below is a full quote from Armenian ambassador Tigran Mkrtchyan’s speech about Grunwald:

Our country and Lithuania, by the way, have quite rich common history. Since the 15th century we have already had relationship with Lithuanians! During the celebration of 25 years of diplomatic Armenian – Lithuanian relations, I always emphasized that Armenian troop fought in decisive battle near Grunwald in 1410 [the Battle of Grunwald, that took place on 15 July 1410, was the deciding battle of “Great War” that occurred between 1409 and 1411. The alliance of the Kingdom of Poland and the Grand Duchy of Lithuaniadefeated the Teutonic Knights–Ed.]. It is an important and symbolic fact.”

It looks like in such way a pretext to build new Armenian monuments in Lithuania is formed. If we allow Armenians to erect their crosses without any serious political background and personal benefit, then it is important to show gratitude for the help in the Battle of Grunwald in a more solid and impressive way!

If the events will move rapidly in the same direction, we will be protected from the possible Russian aggression by… Armenia with its Russian military base. 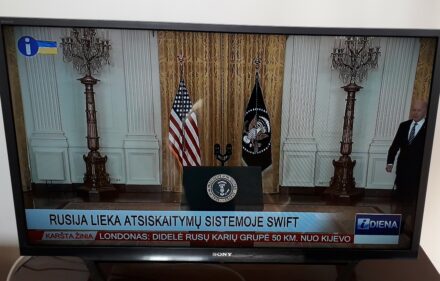 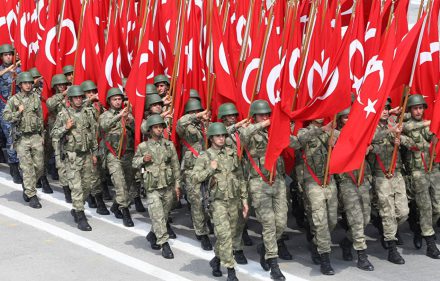