Today I would like to ask: what is journalism worth if it does not seek the truth? What are photo reports worth if their authors are not interested in justice? This journalistic activity is not only useless, it is dangerous. It can lead you down the wrong path: oppose countries, cause new military clashes, hurt a victim, provoke the aggressor to perform new attacks …

Is this path justified?

This bewilderment is addressed to the photojournalist Vidmantas Balkunas, who published “Letters from Nagorno-Karabakh” on the website delfi.lt. On his page on the social network, this journalist, who has traveled a lot around the world and published valuable pictures, writes: “Perhaps that is why I never try to find out which side is right and which is not. And more often than not, there is no right answer. It is important for me to show how people who have fallen into this whirlpool live (…). Geopolitics is definitely not my sphere. (…) And therefore, it is difficult for me to understand people who, being thousands of kilometers from the war, broadcast their truth and explain who is right and who is wrong. “ This is how V. Balkunas philosophizes in social networks. And this is his right, his will. Moreover, V. Balkunas is really courageous – it is dangerous in Nagorno-Karabakh in nowadays.

By the way, Azerbaijan would hardly bless V. Balkunas’s trip to the Black Garden (this is how the name “Karabakh” is translated into Russian). Because if official Baku approved this visit, the journalist would most likely not have been admitted by Armenia, which controls Nagorno-Karabakh. Figuratively speaking, they would consider him a spy of Azerbaijan.

This is an important fact. In my opinion, if we do not follow the rules that secure respect for the territorial integrity of Azerbaijan (including Nagorno-Karabakh), real chaos may ensue, because there will be states that disregard, for example, the fact that Vilnius or Klaipeda regions belongs to Lithuania. Does Lithuania have the right to condemn Western and Russian singers, journalists, politicians who illegally, without the consent of Kiev, Chisinau or Tbilisi, travel to the occupied Crimea, Transnistria or South Abkhazia? We have our own „travelers“ who do not know what respect for international rules that have legalized the borders between states is.

Guilt of the Ministry of Foreign Affairs of Lithuania

The fact that there are strange „tourists“ in Lithuania is a huge fault of the Ministry of Foreign Affairs of Lithuania, which until now officially, publicly, has not clearly stated that it is not recommended to travel to Nagorno-Karabakh with an Armenian visa. It is impossible to prohibit Lithuanian citizens from traveling to Nagorno-Karabakh from Yerevan, and not from Baku. But they must be warned. And it was necessary to do so as soon as the first shots thundered. After all, it could have been predicted that Armenian ambassador Tigran Mkrtchyan, residing in Lithuania, would feverishly seek curious people who would agree to visit suffering Armenians in Nagorno-Karabakh.

Our parliamentary Committee on International Affairs, and the leaders of parliamentary friendship groups with Armenia and Azerbaijan, and, ultimately, Lithuanian journalists’ organizations, could have explained to Lithuanian citizens why it is undesirable to travel to Nagorno-Karabakh with the blessing of Armenia. No bans, no threats – just a warning: it is not recommended. By the way, my conscience is clear: back in 2014 in my articles on the slaptai.lt. I urged not to send Lithuanians to Nagorno-Karabakh from the Armenian side.

If you ask who gave me the right to reproach brave journalists who travel to hot spots, I will answer: I have such a right. I have been working as a journalist for over 35 years and have seen some violent conflicts with my own eyes. Russian-Chechen, Ossetian-Ingush, Georgian-Abkhaz clashes – I saw all this and wrote about all this. But unlike V. Balkunas, I was worried first of all who was right, and not who was louder and more convincingly shouting.

I also cannot be silent, because I am well aware of the Armenian-Azerbaijani conflict – I have been interested in this topic for more than ten years. I cannot boast that I traveled far and wide across Azerbaijan, but I happened to be in the Khojavend, Terter, Barda regions and witnessed how Azerbaijanis who suffered from the Armenian shelling and who lost their loved ones live there. Most of all, I was shocked by a trip in 2016 to the Terter region – the villages of Gasangaya, Gapanly, Maraga, Shikar, which were subjected to increased artillery shelling. I saw ruined houses there, crippled children, women weeping at graves. I was in Ganja, which recently came under an artillery attack by the Armenians. I can give my head to be cut off – both Armenian and Azerbaijani women have equally clear tears. To make sure that everyone has red blood – both Armenians and Azerbaijanis – it is not necessary to go somewhere.

How many Azerbaijanis live in Yerevan?

Still, the difference between the shelling of Ganja and Nagorno-Karabakh is obvious. Azerbaijan is living in their homes in Ganja, Terter, Hasangay, according to international law, live in their own state – in Azerbaijan. And the Armenians who settled in Nagorno-Karabakh do not live in Armenia. They are located on the territory belonging to Azerbaijan. If they are law-abiding citizens, they should obey Baku.

The opponents of the author of these lines, of course, will argue with foam at the mouth that ethnic Armenians live in Nagorno-Karabakh and that there are no Azerbaijanis there. And it is true. But a journalist who is looking not only for impressive shots, but also for the truth, should ask a question:  where did all the Azerbaijanis who lived in Nagorno-Karabakh a few decades ago go? Did they leave of their own will, or were they cynically expelled?

Other inconvenient questions can be asked. For example, where did the Azerbaijani community that lived a hundred years ago in Yerevan disappear? Azerbaijanis in those days constituted the majority in Yerevan – they made about 75% of dwellers. One should be a fool to deny this statistical fact. There is not a single Azerbaijani in Yerevan today. Did they all leave the city of their own free will?

The lesson of Javakheti

And lastly, why does the large Armenian diaspora living in one of the regions of Georgia, Javakhetia, prove today (visit the Armenian portal armenianreport.com) that this is not a Georgian territory, but an Armenian one and therefore, you see, they need to secede from Georgia and create an independent state?! In Javakhetia a tactic, similar to the one that was tested in Nagorno-Karabakh, is used: they oust the locals, then they begin to propagandize the ideas of separatism more and more loudly and blackmail the Georgian authorities harder: if you do not support Yerevan, you will be punished – you will lose Javakheti.

If a Lithuanian journalist got into Nagorno-Karabakh, he should be worried about all the issues. For example, to what extent do American, French, Russian Armenians help the Armenians to fight the Azerbaijanis? It is obvious that Armenia with its three million population (three times less than in Azerbaijan) lacks soldiers. The fact that Armenian militants of all kinds helped the Armenians to attack Azerbaijan earlier (for example, a certain Monte Melkonyan once arrived in Nagorno-Karabakh from Lebanon; later he died), is not a secret to anyone, this information is accessible to those who looking for answers to all, even uncomfortable questions.

And the tales that Turkey sends fighters, subordinate to Ankara and Istanbul, from Syria, Lebanon, Kurdish settlements to Azerbaijan to fight the Armenians are complete nonsense. I received this information from Ambassador of Turkey Gokhan Turan, whose residence is in Lithuania. And, by the way, his words sound quite convincing. Azerbaijan really has enough of its own soldiers to conflict with Armenia. If there was China instead of Armenia, then one would believe that Azerbaijan has too few defenders. But is not the case.

Allegations that all sorts of militants controlled by Turkey are helping Azerbaijanis to offend Christian Armenians are a smokescreen that Yerevan needs to cover up its swindle.

Even French President Emmanuel Macron, who is entangled in Armenian intrigues, needs it today. A large, extremely influential Armenian community lives in France, which the French authorities cannot control. Yerevan via France (and not only via it) is recruiting fighters for the so-called Nagorno-Karabakh front. If everything that the French authorities turned a blind eye to will surface, the French president with his French intelligence and advisers would find himself in an unenviable position. So, the best defense is offense. Therefore, the French authorities began to blame others for what they themselves were to be blamed.

Official Paris makes a gigantic mistake – sooner or later the truth will surface and face the light.

Some 40 days will be spent in prison 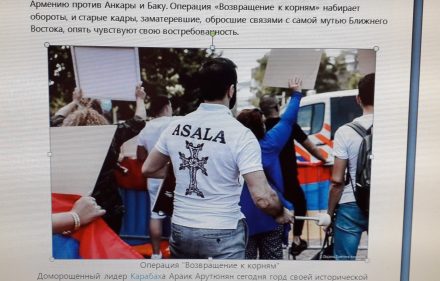